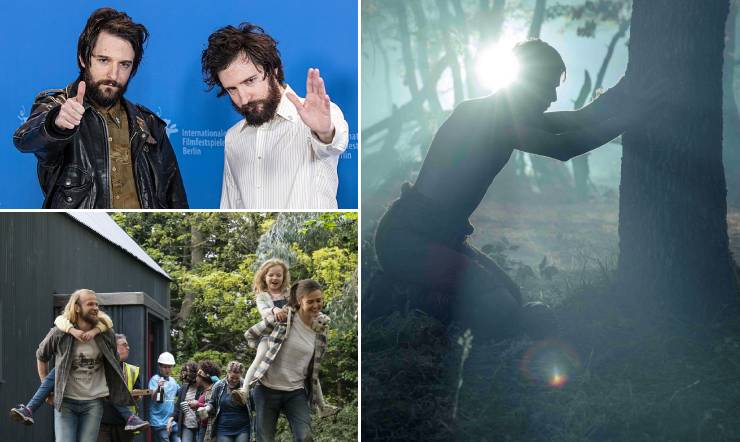 The first two episodes of Romulus, the new Sky Original series, will premiere at the 15th annual Rome Film Fest tomorrow, Friday October 23rd, at 7pm, in the Sala Sinopoli at the Auditorium Parco della Musica. Romulus marks the showrunning debut of Matteo Rovere (Veloce come il vento, Il primo re) on the small screen, with an epic yet realistic construction of the events that led to the founding of Rome, from legend to history to revolution. The series, co-directed by Rovere himself, Michele Alhaique and Enrico Maria Artale, is set in the 8th century BC, in an ancient and primitive world, in which individual destinies are dictated by the ruthless power of nature and the gods. The thirty tribes of the Latin League have lived for years under the leadership of the king of Alba, but now drought and famine threaten the peace and prosperity of this city. Beyond the gates: the forest, a shadowy realm inhabited by cruel and mysterious creatures.

Earlier on Friday, at 5pm, the Sala Sinopoli hosts a Close Encounter with Damiano and Fabio D’Innocenzo, who will talk about their remarkable career in cinema. Their debut film, Boys Cry, premiered at the Berlinale in the Panorama section in 2018, to critical and audience acclaim; it would receive four David di Donatello nominations and win a Silver Ribbon for Best New Director. That same year, Matteo Garrone tapped them to work on the script for Dogman. Their Bad Tales was something completely different on the current Italian film scene; the two brothers would win the Silver Bear for Best Screenplay at Berlin, as well a Silver Ribbon for Best Film and another for Best Screenplay.

Last up in the Sala Sinopoli at 10pm, Herself by Phyllida Lloyd, a co-production with Alice nella città, in which the director of Mamma Mia! has turned out an all-female story. After a long time, Sandra finally finds the courage to escape with her two daughters from her violent husband. Fighting against a society that seems unable to protect her, and with the intent to create a warm environment for the girls, she decides to build a house with her own hands, just for them. Not all will go smoothly, yet during the undertaking, Sandra will find the strength to rebuild her life and will discover herself, thanks to the support of a group of people willing to help her. For Sandra and her daughters, their new life will fortunately never be like the one before.

The Official Selection lineup is represented on Friday by Under the Open Sky by Miwa Nishikawa (My Cityplex Europa at 9:30pm). Mikami, a middle-aged ex-yakuza who has spent most of his life in prison, gets released. He struggles to find a proper job and fit into society. But Mikami’s code of conduct, deeply rooted in the rules of the yakuza crime syndicate he belonged to, does not fit into Japan’s orderly social welfare system. The world into which he is suddenly catapulted is one he doesn’t understand. Being pitied or looked down on is not part of his cultural baggage; he does not comprehend the social grammar of government aid aimed at finding him poorly paid odd jobs. His impulsive, adamant nature and ingrained beliefs cause friction in his relationship with people who want to help him.

Earlier at My Cityplex Europa, at 7pm, the Everybody’s Talking about It section features a screening of The Reason I Jump by Jerry Rothwell, based on the best-selling book by Naoki Higashida, a fascinating story in which the author answers the most common questions about nonspeaking autistic people like himself. Narrated passages from Naoki’s writing reflect on what his autism means to him and others, how his perception of the world differs, and why he acts in the way he does: the reason he jumps. All these elements the film distils lead us to Naoki’s core message: not being able to speak does not mean there is nothing to say.

At 4:30pm, the Sala Petrassi hosts a screening of Vera & Giuliano by Fabrizio Corallo, which celebrates the great love story and a long and fertile sixty-year artistic partnership that have bound director Giuliano Montaldo and his wife Vera Pescarolo, his partner in life and in filmmaking, in a symbiotic relationship nurtured by their creative force. A gentleman and a gentlewoman engage in a dialogue that evokes their shared ethical commitment to making films ready to denounce any type of intolerance and to cultivate their affinities in a constant and cheerful “mutual aid” relationship.

The film Alida by Mimmo Verdesca (at the MAXXI at 6:30pm) is the first-ever cinematic retelling of the life of the legendary actress Alida Valli. The director draws on the star’s own unpublished writings, invaluable archival material and exclusive interviews, all of which make up a comprehensive look at the life of a dazzling beauty from Pola who would shortly become one of the most famous and best-loved actresses in the history of film.

Later at the MAXXI, at 9:30pm, a screening of Marino y Esmeralda by Luis R. Garza. Marino, age eighteen, a young foreign film student, meets Esmeralda, a twenty-year-old student and a painter, in whom he finds the muse he always wanted for his camera. Naively, he discovers little by little that Esmeralda is much more than just that… and soon he sees himself wanting to be what she is to him: her muse.

At 9pm, the Teatro Studio Gianni Borgna will host the event “Naba Short Film and Documentary Contest – Quarantine Effects”. NABA, the New Accademy di Fine Arts, presents a selection of short films made by students in its three-year program in Media Design and Multimedia Arts, with a major in filmmaking. The films examine the universal theme of personal relations as seen through the eyes of the up-and-coming generation and are audiovisual accounts of the experience of the lockdown that involved all of us during the COVID-19 pandemic.

Palazzo Merulana will be holding two talks on the “Duel” format lineup, in which two arts or entertainment personalities face off before the audience, sparring over their different views on issues related to film, its stars and its stories. At 5pm, film critic Giona A. Nazzaro and journalist Gabriele Niola duel over two major filmmakers, Michael Bay and Christopher Nolan, while at 7pm Film Fest programmer Francesco Zippel and the director of Sky Arte, Roberto Pisoni, lock horns over directors Vincente Minnelli and Douglas Sirk.

And the Film Fest inaugurates a new location in the city tomorrow, Friday October 23rd, the outdoor venue at the Teatro di Tor Bella Monaca, under the aegis of RIF, the Museum of Peripheries. This fresh synergy reflects the ever-increasing involvement, year after year, of the city of Rome and locations outside the nerve centre of the Fest itself in downtown Rome. This venue will host a showcase with a musical theme, the underlying thread of all four titles being screened at the Teatro di Tor Bella Monaca. It kicks off at 7pm with Disco Ruin – 40 anni di club culture italiana by Lisa Bosi and Francesca Zerbetto.

The Casa del Cinema hosts two films from the Satyajit Ray retrospective on Friday: The Stranger at 6pm and The Philosopher’s Stone at 9pm. In the “Films of Our Lives” section, tomorrow’s screening is Forbidden Planet by Fred M. Wilcox (MAXXI at 4pm). The latter was chosen by the head of retrospectives at the Fest, Mario Sesti, who says of the film: “It is to science fiction what Stagecoach was to the golden age of westerns.”

The collaboration between the Rome Film Fest, Medicinema Italia onlus and the Fondazione Policlinico Universitario Agostino Gemelli IRCCS continues tomorrow, Friday October 23rd, at 4pm, with a screening of My Name is Francesco Totti. The film, directed by Alex Infascelli, retraces the steps of the former AS Roma captain’s football career. The screening at the Gemelli Hospital will be preceded by a clip by filmmaker Infascelli greeting the patients watching the film from their hospital rooms and sharing some backstage tidbits about the making of the film.

At the Teatro Palladium at 8pm, Fest audiences can catch a screening of Earthling: Terrestre by Gianluca Cerasola.

Repeat screenings at My Cityplex Savoy include: The Shift by Alessandro Tonda (at 4pm), Honeydew by Devereux Milburn (at 6:30pm), and Under the Open Sky by Miwa Nishikawa (at 9:30pm) in Sala 1, while Peninsula by Yeon Sang-ho (at 5:30pm) and The Reason I Jump by Jerry Rothwell (at 8:30pm) are in Sala 2.

My Cityplex Europa hosts a repeat screening of Stardust by Gabriel Range (at 3:30pm).