#RomaFF15 | At the Rome Film Fest the first two episodes of “Romulus”, the new series created by Matteo Rovere

The first two episodes of the Romulus, the new Sky Original series, will be previewed at the fifteenth edition of the Rome Film Fest which will take place from 15 to 25 October 2020 at the Auditorium Parco della Musica.

With Romulus, a production by Sky, Cattleya – part of ITV Studios – and Groenlandia, Matteo Rovere (Veloce come il vento, Il primo re) authors his first project for television, an epic saga and a realistic reconstruction of the events that, between history, legend and revolution, led to the founding of Rome. The series, directed by Rovere himself with Michele Alhaique and Enrico Maria Artale, is set in the eighth century B.C., in a primitive and brutal territory in which everyone’s fate is decided by the relentless power of nature and the gods.

The thirty peoples of the Latin League have lived for years under the rule of the King of Alba, but drought and hunger threaten the peace and life of these cities. Beyond their boundaries is the forest, a dark place inhabited by cruel and mysterious creatures.

Romulus is a series in ten episodes, filmed in proto-Latin and written by Filippo Gravino, Guido Iuculano and Matteo Rovere himself. The international distribution is by ITV Studios. Romulus will make its debut in November exclusively on Sky and in streaming on NOW TV.

The fifteenth Rome Film Fest will take place from 15 to 25 October 2020 at the Auditorium Parco della Musica. The event, under the artistic direction of Antonio Monda, is organized by the Fondazione Cinema per Roma chaired by Laura Delli Colli, General Manager Francesca Via. 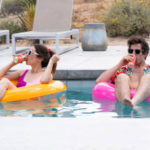