#RomaFF14 | October 24, filmmaker and critic Olivier Assayas to be featured in a Close Encounter 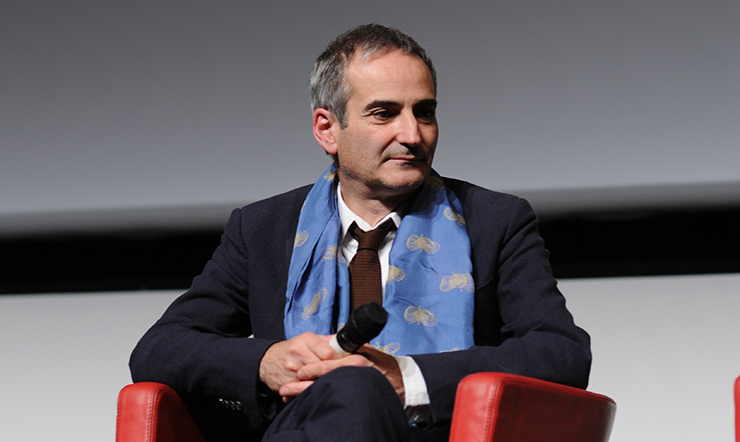 Olivier Assayas is the featured guest on Thursday October 24th, in a Close Encounter with the audience at the fourteenth Rome Film Fest: at 6 pm in Sala Petrassi at the Auditorium Parco della Musica, the director from Paris will talk about the Nouvelle Vague and his experience as a critic for Cahiers du Cinéma. The author of an intense and exciting body of work, shaped by his great attention to storytelling and the psychological complexity of the characters. Assayas has explored different territories, from the representation of childhood and adolescence (L’eau froide, Winter’s Child) to reflections on cinema and its countless styles (Irma Vep), through historical period dramas (Les Destinèes sentimentales) to the world of television series (Carlos, winner of the Golden Globe).

Four films from the Official Selection are scheduled for screening on Thursday October 24th.

At 7:30 pm Sala Sinopoli will be the venue for the screening of Le meilleur reste à venir by Alexandre de la Patellière and Mathieu Delaporte, a French comedy that confirms the talent of the directors of What’s in a Name. Arthur and César have been close friends for longer than they can remember. Following an enormous misunderstanding, which convinced each of them that the other was at death’s door, they decide to make up for lost time and spend the rest of their days in each other’s company.

At 10 pm, in the same theatre, there will be a screening of Western Stars by Thom Zimny and Bruce Springsteen, a film-documentary about Springsteen’s most recent album byd that name in which the Boss performs all thirteen pieces on the album. Springsteen will be accompanied not only by his band, but by an entire orchestra. The film-documentary addresses themes such as love, loss, solitude, family or even the inexorable passage of time, with film clips from the archives and Springsteen telling his own story.

At 8 pm, Sala Petrassi will hold the screening of Run with the Hunted by John Swab. A young boy named Oscar commits murder to save his best friend Loux from an attack, and is forced to escape the country town he was born in and leave everything behind. He escapes to the nearest city, where he becomes part of a gang of young street thieves, and as he falls into a life of crime and corruption, he watches his innocence slip away. Fifteen years later, Oscar has forgotten his past and become the boss of this gang of lost boys. When Loux moves to the same city to find a job, she begins to work with a private investigator, and sets off in search for the boy who saved her life.

At 9:30 pm at the Teatro Studio Gianni Borgna Sala SIAE, the screening will present Your Honor by Andres Puustusmaa. The Judge is a man who represents strict and inflexible law in the courtroom. However, his own personal life is an absolute mess, a lost cause. After the judge rules to give a woman a long prison sentence, the woman’s brother begins to follow the judge to convince him to change his mind about the verdict. The judge remains adamant: the verdict is final. A conflict arises between the men, leading the judge to commit a terrible crime himself. Unable to confess what he has done, the judge escapes to Finland. Here his journey begins. A journey that takes him back to fix his earlier decision.

In the “Everyone is talking about it” section, at 9:30 pm in Sala Petrassi the screening will feature The Vast of Night by Andrew Patterson, a science-fiction thriller that pays tribute to early Spielberg and “The Twilight Zone”, the cult television series created by screenwriter Rod Serling in 1959. At the end of the 1950s, on a summer night, in a small city in New Mexico, while residents gather for a basketball game at the local high school, two young people, a radio announcer and an operator, discover a mysterious and extravagant frequency over the radio waves in their city, which drives them to investigate their origin, and to change their lives forever.

At 12 at the Studio 2 in the Auditorium Parco della Musica, the Rome Film Fest will honour the memory of Father Virgilio Fantuzzi, who died last September at age 82. Paolo Taviani and Marco Bellocchio will take centre stage in an encounter organized by the Film Fest to commemorate this outstanding film critic: the two filmmakers will be accompanied by the editor of Civiltà Cattolica magazine, Antonio Spadaro, and by Laura Delli Colli and Antonio Monda. “Virgilio Fantuzzi was a great film critic as well as a permanent presence and a passionate reference point for all of modern cinema, explained Antonio Monda. From Pasolini to Scorsese, from Fellini to Rossellini, not to mention Bertolucci and the Taviani brothers, the most important directors from all over the world have paid heed to his analyses, initiating a dialogue that turned into inspiration and friendship. I am pleased and proud to pay tribute to his memory at the Rome Film Fest”.

The ”Duel” format presents four events: at 5:30 pm in Teatro Studio Gianni Borgna SIAE, Walter Veltroni and David Grieco will face off in a comparison between the two great films The Deer Hunter and Apocalypse Now. At the MACRO Asilo, at 6 pm, the challenge between Alberto Crespi and Giorgio Gosetti will focus as a theme on the directors John Ford and Sam Peckinpah, two great auteurs of the western genre. In the same space, at 8 pm, Federico Pontiggia and Malcom Pagani will compare two Italian directors, Matteo Garrone and Paolo Sorrentino. The daily programme of the Fest’s new format will be completed at Palazzo Merulana by the challenge between Andrea Minuz and Marina Sagona (at 6:30 pm), who will present to the public their diverging opinions of the films Singin’ in the Rain and Effetto Notte.

At 11 am, the MAXXI hosts the round table “Costume Design…Italian Style”, moderated by the celebrated costume designer Deborah Nadoolman Landis, together with Daniela Ciancio, Eva Coen, Stefano de Nardis, Gabriella Pescucci, and Carlo Poggioli. The event is co-produced by the Academy of Motion Picture Arts and Sciences and the Rome Film Fest, in collaboration with ASC and Istituto Luce Cinecittà, with the support of Swarovski.

In the MAXXI Auditorium at 5 pm, Fest audiences can catch a screening of I Wish, a film on the lineup of the retrospective devoted to the Japanese filmmaker, screenwriter and editor Hirokazu Kore-eda. At 7:30 pm, the same theatre will host a screening of La ruota del Khadi – L’ordito e la trama dell’India by Gaia Ceriana Franchetti, a history of contemporary India revealed through its weaving arts: from Khadi to handlooms and powerlooms, from Independence to modern India. As light as the fabrics, this elegant, lucid and powerful film depicts the country as seen through the eyes of Gaia, an Italian who has travelled widely throughout India. The story is illuminated by the voice and charismatic presence of Tara Gandhi Battercharjee, Mahatma Gandhi’s niece, who lived with him until the age of sixteen.  And at 9:30 pm, the MAXXI will also be hosting the talk “Writing TV Series”, curated by Alberto Crespi. Speakers will include, among others, Giancarlo De Cataldo (who wrote the series Romanzo Criminale, based on his own novel of the same name, and Suburra: Blood on Rome) and Ludovica Rampoldi (who wrote the TV series Gomorrah, 1992 and 1993).

The Sala Deluxe at the Casa del Cinema hosts a 6 pm screening of Ninotchka by Ernst Lubitsch, Valerio Carocci’s pick for the “Films of Our Lives” section. In the same theatre, Fest audiences can also catch The Reckless Moment (at 8:30 pm) and Divine (at 10 pm), two titles on the lineup of the Fest’s retrospective devoted to German filmmaker Max Ophüls.

The Rome Film Fest programme at the Teatro Palladium features an 8:30 pm screening of Ludwig by Luchino Visconti. The film, in commemoration of Pietro Tosi who was responsible for the costumes in this one of his many collaborations with Luchino Visconti, is a monument to Ludwig, an emblematic figure of Decadentismo and a typically Viscontian character: an aristocratic aesthete, removed from reality, politics and history, confined in the majestic castles he had built for himself. The film will be introduced by Olivier Assayas, who personally selected this Visconti film for Fest audiences.

At 4 pm, the Rebibbia Auditorium plays host to the European premiere of the documentary made by the Franco-German television channel ARTE, Prison de Rebibbia. L’évasion par le théâtre [subtitles in Italian]. Directed by Marie David and produced by Hikari Corporate, the film is based on the play Istruzioni di volo by Laura Andreini Salerno, starring the actor-inmates of Rebibbia Prison. The director and entire cast will be on hand for the screening (PREXIT Social Inclusion Project, Lazio Region). Free admission upon accreditation (mandatory) at rebibbiafestival@gmail.com

At 6 pm on Thursday, the heady atmosphere of Woodstock, the iconic 1969 concert immortalized in so many films, will be recreated on Via Condotti, with a performance by the ballet corps from the dance school Punte & Mezzepunte, choreographed by Chiara Sasso. The vibes from that protest era, with its calls for freedom, will sound on the red carpet laid down for the occasion on the loveliest and most elegant street in Rome. From Largo Goldoni to the Spanish Steps, 10 dancers in costume will perform for Festgoers and random passers-by, and get anyone who is dressed 60s style involved in the show. The event has been jointly produced with the Associazione Via Condotti and is the brainchild of Hdrà, designed for “It All Happens on the Red Carpet”, the showcase of music, dance, art and culture that, in a collaboration between Rome’s 1st Municipal District and the Fondazione Cinema per Roma, celebrates cinema and its connection to Italy’s capital on the occasion of the 14th Rome Film Fest.

There are numerous repeat screenings on the Thursday programme: In Sala Sinopoli, Festgoers can catch Judy (at 5 pm), while the Teatro Studio Gianni Borgna SIAE hosts a screening of Drowning (at 3pm). Three repeat screenings are offered at the Frecciarossa Cinema Hall: Hustlers (at 5:30 pm), Le meilleur reste à venir (at 8 pm), and Western Stars (at 10:30 pm). The MAXXI Auditorium will hold a repeat screening of Where’s My Roy Cohn? (at 3 pm). 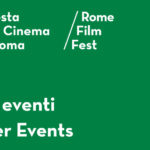 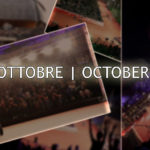