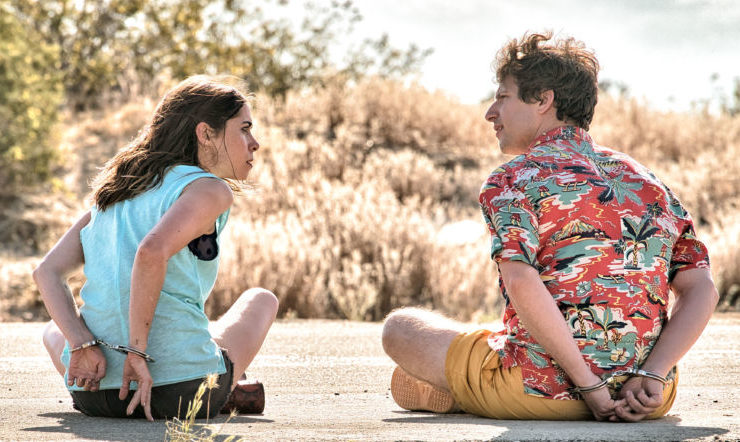 Palm Springs by Max Barbakow will be presented tomorrow, Sunday October 18th, at the fifteenth Rome Film Fest. At 10 pm, Sala Sinopoli will host the first feature-length fiction film by the Californian director and writer: the film comes to the Fest after its surprising debut in the United States, on the strength of the acclaim it received from critics and audiences alike at the Sundance Film Festival. The film follows events in the life of two people who meet by chance at a wedding in Palm Springs: things get complicated when the carefree Nyles and the reluctant maid-of-honour Sarah are stuck in a time loop, and unable to escape from the reception, themselves and especially, one another.

The co-production with Alice nella città, Tigers by Ronnie Sandahl, will be presented in Sala Sinopoli at 7:00 pm. Martin Bengtsson is a football prodigy, the most promising talent that Sweden has ever seen. At the age of sixteen, Martin’s childhood dream of becoming a professional football player comes true when he is bought by one of the top international and Italian clubs, Inter. It’s the chance of a lifetime, but at what price? As he adjusts to a reality where everything and everyone can be bought and sold, Martin finds it increasingly difficult to tell sacrifice from submission, pleasure from pain, friend from foe.

From the line-up of the Official Selection, at 9:30 pm the MAXXI will present the screening of After Love by Aleem Khan. In the film, Mary Hussain, who converted to Islam when she married, is now in her early sixties and lives quietly with her husband Ahmed in the coastal city of Dover, in south-eastern England. Following her husband’s unexpected death, Mary suddenly finds herself a widow. A day after the burial, she discovers that he had a secret life in Calais, across the English Channel just twenty-one miles away from their Dover home. The shocking discovery compels her to go there to find out more.

To celebrate the one hundredth anniversary of Federico Fellini’s birth, at 7:00 pm the My Cityplex Europa will hold two screenings that pay tribute to the director from Rimini. The opening film will be the short La Fellinette by Francesca Fabbri Fellini, the story of a little girl drawn by Federico Fellini on a page in a notebook in far-off 1971, who becomes the protagonist of this fairy tale set on the beach in Rimini on January 20th 2020, on the one-hundredth anniversary of the great Master’s birth. It will be followed by the documentary Fellinopolis by Silvia Giulietti: the world of Federico Fellini, inside the Cinecittà studios, populated by his characters, and told by the people he worked with, Lina Wertmüller, Dante Ferretti, Nicola Piovani, Maurizio Millenotti, and by glimpses backstage by Ferruccio Castronuovo, which emerge from a past over forty years away.

At 9:30 pm, also at My Cityplex Europa, audiences are invited to the screening of Hasta el cielo by Daniel Calparsoro, in the Riflessi section of the programme. When he meets Estrella for the first time, Angel doesn’t know that this girl will change his life. Poli can’t allow Angel to steal his fiancée. But he convinces him to join his gang of jewel thieves.

After last year’s success, the fifteenth Rome Film Fest brings back the “Loyalty/Betrayals” events, during which some of the most interesting cultural personalities comment on the film adaptations of famous literary works. At 7:00 pm, the film critic and director Steve Della Casa will talk about The Night of the Living Dead.

In the retrospective dedicated to Satyajit Ray, the Casa del Cinema will host a conversation about the aesthetics, language and technique of the Indian filmmaker, featuring the curator Mario Sesti, the director of the Casa del Cinema Giorgio Gosetti, the director Italo Spinelli and the artistic director of the River to River Florence Indian Film Festival, Selvaggia Velo. At 9:00 pm, there will be a screening of the film Devi (The Goddess) which the Indian director set in 1860: Umaprasad, the son of a wealthy family from Bengala, goes to Calcutta to study and leaves his wife Doyamoyee at his father’s house. The latter, after dreaming that his daughter-in-law appeared as the goddess Kali, becomes convinced that she is in fact her reincarnation and turns her into a cult object for the local population. Umaprasad does not accept this, but now even the girl believes she is a goddess. When their nephew becomes ill, however, she can do nothing to cure him, and loses her mind.

The programme of the Teatro Palladium will feature a screening, at 8:00 pm, of Era la più bella di tutti noi – Le molte vite di Veronica Lazar by Leonardo Celi and Roberto Savoca. In this biographical docufilm, presented as one of the Fest’s pre-opening events, Alexandra Celi talks about the multifaceted life of her mother, Veronica Lazar, who was a stage and film actress, a Jewish exile from Transylvania, married to Adolfo Celi, a cultural organizer, a professional psychologist, a proud and revolutionary woman who died in 2014.