My Name is Francesco Totti by Alex Infascelli, the multiple-award-winning director of Almost Blue and S Is for Stanley, will be presented tomorrow at 7pm in the Sala Petrassi of the Auditorium Parco della Musica. In the documentary, the former captain of the Roma team retraces his life story as if he were watching the movie of his life, along with audiences. Scenes capturing the highlights of his career and his personal life, first-time reminiscence – all start to flow, along with the emotions. An intimate first-hand look at the athlete and the man. The screening of the film follows in the Sala Sinopoli at 7:30pm.

Next up in the Sala Sinopoli, at 10:30pm, the premiere of Summer of 85, written and directed by François Ozon. The film tells the story of sixteen-year-old Alexis, who spends the summer of 1985 at a seaside resort on the coast of Normandy, Alexis is saved one day from drowning by the heroic act of eighteen-year-old David: Alexis doesn’t know it, but he has just met the friend of his dreams. But will the dream last for more than one summer?

The My Cityplex Savoy cinema will be hosting two films from the Official Selection on Saturday. The first, at 7pm, is the world premiere of Ricochet by Rodrigo Fiallega. Martijn is a man in his mid-fifties. A foreigner, he has lived in a quiet town in Mexico for twenty years and got married and started a family there. Then his son was killed during the town’s festival. Since then, Martijn has developed a terminal disease and separated from his wife. The day shown in the film is the one when Martijn hears his son’s murderer is getting out of jail. At that very moment Martijn decides to take revenge. The second offering, at 9:30pm, is The Best Families by Javier Fuentes-León. “We wanted to make a film that would become a mirror in which to reflect what separates us, but also what unifies us,” the director declares. “And what better tool than humour to invite us to face our social faults? We want to make people laugh so that they can open themselves up to the social reflection underlying the comedy.”

At 9pm in the Teatro Studio Gianni Borgna, John Waters takes the stage for a Close Encounter with Fest audiences. A cult figure and a key figure in contemporary cinema, John Waters has authored some of the most transgressive and provocative films of all time. Duke of Dirty, Pope of Puke, or Pope of Trash: these are monikers that Waters has always been proud of, claiming that “it takes good taste to appreciate bad taste”. During the Close Encounter, Waters will discuss his career in film and the movies that have shaped him as a filmmaker.

It was a hit last year, and it’s back this year at the 15th annual Rome Film Fest: “Duel”, the talk series which features two cultural, film or entertainment figures who face off before Fest audiences, sharing their opposite takes on issues related to cinema, its leading players, and its stories. The duelling debuts tomorrow, Saturday, October 17, at 5pm at the MAXXI, when the Film Fest’s Artistic Director, Antonio Monda, confronts Francesca Chiamulera, creator and director of the festival “Una Montagna di Libri”, the literary talk series in Cortina, and the Cortina d’Ampezzo Award for Literature. They will be sparring over two classic science-fiction films: Close Encounters of the Third Kind by Steven Spielberg and Alien by Ridley Scott.

Two events are scheduled at the MAXXI tomorrow. At 6:30pm, the screening of Glauber, Claro by César Meneghetti is an occasion to revisit the return to Rome – the Rome of his Italian exile – of the greatest Brazilian filmmaker of all time, after nearly half a century.

At 9:30pm, the MAXXI hosts a screening of The Eumenides by Gipo Fasano. The film is named after the third play in the Oresteian Trilogy, which follows Orestes as he is pursued by the Furies and is put on trial for his crime, only to be acquitted thanks to Athena’s deciding vote. The film itself revolves around the last night of freedom of a young man from a well-heeled Roman family. After having committed a crime, Valerio wanders aimlessly, in flight from invisible demons, awaiting judgment.

And tomorrow, Saturday, October 17th, the slate of seven screenings at the Teatro Palladium gets underway. It kicks off at 8pm with Un cielo stellato sopra il ghetto di Roma by Giulio Base, the story of the discovery of a mysterious yellowed photograph depicting a little girl, which will lead Christian and Jewish students to search for the truth. They undertake a journey through the memory of a painful past that is hard to forget, such as the 1943 raid on the Jewish ghetto of Rome.

After the premiere of Red, White and Blue, the Rome Film Fest treats audiences to two more episodes from the series Small Axe by Oscar®-winning filmmaker Steve McQueen, which features stories of the fight against racism in the Caribbean community of London between 1969 and 1982. The My Cityplex Savoy will be screening Mangrove at 11am and Lovers Rock at 3:30pm.

The Satyajit Ray retrospective continues at the Casa del Cinema: at 6pm, The World of Apu, and at 9pm, The Music Room. The following are the repeat screenins at the My Cityplex Savoy on Saturday: Their Algeria by Lina Soualem (at 4pm), Stardust by Gabriel Range (at 6:30pm), My Name is Francesco Totti (at 9:30pm), Small Axe – Red, White and Blue by Steve McQueen (at 5:30pm), and Time by Garrett Bradley (at 8:30pm). 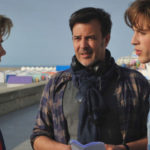