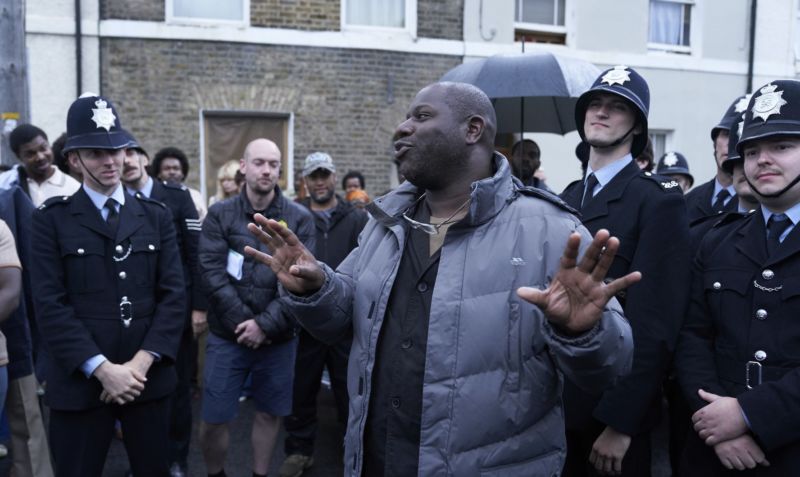 On Friday, October 16th, at 5pm in the Sala Sinopoli at the Auditorium Parco della Musica, filmmaker Steve McQueen takes the stage for a Close Encounter at the 15th annual Rome Film Fest. The director of Hunger and Shame, Oscar® winner for 12 Years a Slave, Steve McQueen will receive the Fest’s Lifetime Achievement Award and present his new TV series Small Axe, featuring stories set between 1969 and 1982 in the Caribbean community of London, all linked by the theme of the fight against racism. A preview of the episode Red, White and Blue, based on the true story of Leroy Logan, a black police officer who comes up against the racism in the force, will be screened in Sala Sinopoli at 10pm.

There are four other premieres from the Official Selection on Friday:

At 7pm the Sala Sinopoli hosts Supernova by Harry Macqueen: Sam and Tusker, partners of twenty years, are travelling across England in their old campervan visiting friends, family and places from their past. Since Tusker was diagnosed with young-onset dementia two years ago, their time together is even more precious. is now the most important thing they have. The film explores the meaning of love in the face of adversity.

My Cityplex Europa is the venue for the premiere of The Jump by Giedre Žickyte at 7pm. In the Cold War years of the 1970s, an American patrol boat meets a Soviet ship off the East coast of the United States for talks about fishing rights in the Atlantic. In the midst of this, while Soviet commanders are aboard the US Coast Guard vessel where the talks are being held, a Lithuanian sailor jumps across the ten feet of icy water separating the boats. Crash-landing on the deck of the American ship, he desperately begs for asylum. Though they try, the Americans ultimately fail to provide protection and the Soviets are allowed to capture him and return him to their vessel. But this was only the beginning of the story.

And at 9pm at My Cityplex Europe, Festgoers can catch Stardust by Gabriel Range, which goes behind the scenes at the time when David Bowie’s first and most memorable alter ego, Ziggy Stardust, came into being. “I set out to make a film about what makes someone become an artist; what actually drives them to make their art,” the filmmaker explains. “That someone is David Bowie. Rather than make a biopic, or a spin through his greatest hits, the idea was to make a film about what we’ve not seen: the interior journey David Bowie might have taken to become that artist.”

At 9:30pm at the MAXXI Auditorium, the premiere of Time by Garrett Bradley brings to the Fest a documentary about the life of Fox Rich, a dauntless warrior who has spent the last twenty years of her life fighting for the release of her husband, Rob G. Rich, who is serving a sixty-year prison sentence for a robbery that, in a moment of desperation, they pulled off together in the early 1990s.

Earlier at the MAXXI, at 6:30 pm, the Riflessi slate offers a screening of Their Algeria by Lina Soualem. After living together for 62 years, Aïcha and Mabrouk, Lina’s grandparents, have decided to separate. Side by side, they experienced a chaotic immigrant life. For Lina, their separation is an opportunity to question their long journey of exile, as well as her identity.

Meanwhile, over at the National Museum of 21st-century Arts (MAXXI), there will be a repeat screening, at 4pm, of Porto Rubino – Storie, canzoni e lupi di mare, one of the Film Fest’s pre-opening titles. In this documentary, Fabrizio Fichera recounts the story of

Italian singer-songwriter Renzo’s sailing along the coast of Puglia in a small boat, in search of a dangerous sea monster: plastic. It’s an adventure that tastes of saltwater and fear, freedom and communion. During his journey Renzo is given a hand by some very special sailors and seamen including Giuliano Sangiorgi, Antonio Diodato, Paola Turci, Vasco Brondi, Noemi, Bugo, and Gino Castaldo. The goal? Make it to Taranto in one piece.

After the success of the format last year, the talk series “Loyalty/Betrayals” brings some of the most interesting personalities on the cultural scene today together to the Fest stage to offer their takes on the screen adaptations of literary classics. The talks will be held at the MACRO from October 16th to 25th, every evening at 7pm. It kicks off tomorrow, Friday, October 16th, with Concita De Gregorio, who looks at the numerous film adaptations of Don Quixote by Miguel de Cervantes.

And across town at the Casa del Cinema, the 15th annual Film Fest’s Retrospective gets underway. Curated by Mario Sesti, this year it is devoted to one of the greatest filmmakers in the history of cinema: Satyajit Ray. Producer, filmmaker, screenwriter and composer of his own film’s scores, in his oeuvre Ray explores diverse genres and continually reworks his own style and approach. Traditional Indian culture and literature are important influences on his work, as is Italian neorealism and an international perspective that led him to take on the ideological clashes with western culture.  Ray won numerous awards over the course of his career, from the Golden Lion to the Oscar® for Lifetime Achievement. The first two titles in the Retrospective are Song Of The Little Road at 6pm and The Unvanquished at 9pm.

These are Friday’s repeat screenings at My Cityplex Savoy: Soul by Pete Docter (at 6:30pm), Supernova by Harry Macqueen (at 9:30pm) in Sala 1, and The Jump by Giedre Žickyte in Sala 2 at the same time.