#RomaFF13 | Cinema from around the world hits Rome Film Fest 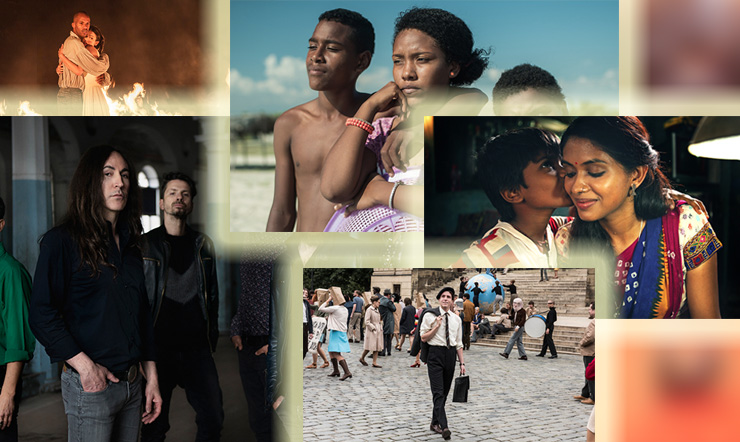 On Tuesday October 23rd, the Official Selection of the Rome Film Fest will present three productions from three different continents. From Asia, Mere Pyaare Prime Minister (My Dear Prime Minister) by Indian director Rakeysh Omprakash Mehra, which will be screened in Sala Petrassi at 8 pm: the main character in the story is Kannu, an eight-year old boy who lives with his single mother Sargam, in Gandhi Nagar, a slum in Mumbai named after Mahatma Gandhi. At Gandhi Nagar there is satellite television, there are refrigerators, Internet and smartphones in every home, but no toilets. The women must therefore wander out at night into the darkness to defecate. One night, as Sargam goes out to answer nature’s call, she is raped. Kannu now becomes obsessed with building a bathroom to keep his mother safe and is ready to do anything to make that happen.

Jan Palach by Robert Sedlácek (Sala Petrassi at 10:30 pm) is a Czech and Slovakian co-production about the life of the student who set himself on fire in 1969 to protest the Soviet invasion of Czechoslovakia. This young man chose to make the supreme sacrifice in the hopes of opening the eyes of his people. Through his relationship with his girlfriend, his life as a student, his time living at home with his mother, and his journeys to France and Kazakhstan as a seasonal worker, we follow the path he took that would lead him – devoted son, loyal friend, sensitive and thoughtful student of philosophy – to become “the first human torch”, as he called himself in one of his writings.

Teatro Studio Gianni Borgna Sala Siae, at 9:30 pm, will show the first fiction film from Mexico about the Afro-Mexican community: La negrada by Jorge Pérez Solano. Among the black population on the Costa Chica in Oaxaca, the “queridato”, the fact that a man lives with more than one woman, is socially accepted. Juana and Magdalena share Neri’s love, although they both realize that this situation makes them suffer. Juana’s death will make it clear to Magdalena that she needs to change course in her life so that she can take control of her own fate, without Neri.

Sala Sinopoli will be the venue for two “Special Events” combining cinema and music. The first, at 7:30 pm, is The Magic Flute of Piazza Vittorio by Mario Tronco and Gianfranco Cabiddu, a musical in eight languages in which the musicians of the multi-ethnic Orchestra di Piazza Vittorio rewrite and reinterpret Mozart’s opera, enriching it and adapting it to a modern setting, based on each musician’s traditions and musical culture. It all happens in the gardens of Piazza Vittorio, which magically come to life at night. Unlike Mozart’s opera, however, the female characters can change the course of events and play a decisive role.

At 10 pm, there will be the screening of We Are Afterhours, a documentary film in which the director Giorgio Testi, taking his cue from the sold-out concert held at the Forum of Assago on April 10th of this year, tells the thirty-year story of the band led by Manuel Agnelli, from its debut singing in English to the international tours, from the change of formation to today’s line-up. The images of the concert alternate with those of the past in a story told by Manuel Agnelli’s narrating self, as he leads the spectator in an intimate journey across the music of a band that has made the history of Italian rock. The band will be present at the screening, following which it will perform a short electro-acoustic showcase.

Thierry Frémaux, Director General of the Institut Lumière in Lyon since 1997, at the head of the Cannes Film Festival since 2001, first as Artistic Director and later as General Delegate, will be the featured guest of a Close Encounter to be held in Teatro Studio Gianni Borgna Sala Siae at 5:30 pm. As the organizer of the most prestigious of film festivals, Frémaux has proven able to reconcile the two souls of cinema, the commercial and the artistic. He has spent his life viewing more than a thousand films a year, searching for and selecting films around the world, convincing actors, directors and artists to serve as members of the juries. He has told the story of this life in his autobiography “Sélection officielle”, published in France in 2017 by Grasset: six hundred pages of memories and anecdotes about glitches, conversations and diplomatic solutions to solve the most complicated situations. Frémaux has recently brought controversy upon himself for the rigorous decisions, some of them against the tide, that he made during the last edition of the Festival.

The conversation between Frémaux and the audience of the Rome Film Fest will be an opportunity to discuss the meaning of film festivals today and how they might evolve in the future.

Fondazione Cinema per Roma, executive body of Rome City of Film as delegated by Roma Capitale, has organized Cinedays, the International Conference of Creative Cities, to be held at the MAXXI at 9:30 am. This year’s focus is urban storytelling, to explore how the cultural identity of creative cities produces meaning through narration, the purpose of which is to spread and develop the challenging values of the UNESCO Network. The Ideal City is the theme of the international short film contest launched in September by Rome City of Film on the occasion of the next UNESCO Annual Meeting, which will be held for the first time in Italy, in Fabriano – City of Crafts & Folk Art UCCN, from 10 to 16 June 2019. Tomorrow speakers will include Laura Delli Colli, Antonio Monda, Luca Bergamo, Lucio Argano, Alessandro Gaido, Filippo Del Corno, Vittorio Salmoni, Niedja de Andrade, Jordi Hernández Prat, Luciano Sovena, Enrico Bufalini, Mario Musumeci, Giorgio Gosetti, Paola Malanga, Carlo Infante, Lorenzo Romito, Gianluca Del Gobbo and Paolo Della Sega. Cinedays 2018 was made possible by the support of the Istituto Luce Cinecittà, Centro Sperimentale di Cinematografia, Roma Lazio Film Commission, Rai Cinema, Casa del Cinema.

At 5:30 pm, Sala Petrassi will screen Donbass. Borderland by Russian director Renat Davletyarov. The film addresses the theme of the four-year conflict in Eastern Ukraine, which is still unresolved: a civil war that has caused over ten thousand deaths, both combatants and civilians. “The tragedy of this war,” the director declares, “is the fact that the people who are killing each other speak the same language and wear the same uniforms.” The film is set in August 2014 in the suburbs of Donetsk. Andrey Sokolov, a young Ukrainian soldier and driver on a mission in the combat zone of Donbass, seeks shelter from the grenades in the basement of an apartment building where he meets people from diverse social backgrounds, each with their own story and world view. But they all share the same dream: for the war to end as soon as possible.

On July 3rd, 2017, after twenty years of private ownership, Cinecittà film studios and post-production laboratories became public again. Rome Film Fest has decided to celebrate the first anniversary of the Istituto Luce Cinecittà public status this year with the screening of some of the most prestigious films made on its premises. The first film to be screened will be Once Upon A Time in America, Sergio Leone’s masterpiece, at Cinema Hall at 3 pm. We wish to thank the General Direction Cinema of the MiBAC, Fondazione Centro Sperimentale di Cinematografia and the Leone family for the screening.

Two events are scheduled at Casa del Cinema: at 6 pm, for the “Films of Our Lives” section, there will be a screening of In a Lonely Place by Nicholas Ray, whereas at 9 pm the featured film will be What’s New Pussycat, directed by Clive Donner and starring Peter Sellers. The actor, to whom one of the two retrospectives of the thirteenth Rome Film Fest is dedicated, is also the star of Stanley Kubrick’s film Doctor Strangelove – Or: How I Learned to Stop Worrying and Love the Bomb, which will be shown at 3 pm in Teatro Studio Gianni Borgna Sala Siae.

The second retrospective, dedicated to Maurice Pialat, will be held at MAXXI Museum, with the screening at 5 pm of Police, a film directed by Pialat.

At 9:30 pm, MAXXI Museum will hold the screening of Le Vietnam Sera Libre, a documentary in which Cecilia Mangini, with the help of Paolo Pisanelli, tells about her personal experience in North Vietnam during the war with the United States, as she searched for locations for a documentary. Immediately afterwards, there will be the screening of one of the three films selected personally by Martin Scorsese, restored with the support of the Film Foundation he promotes: Detour by Edgar G. Ulmer (1945), in the version curated by the Academy Film Archive and The Film Foundation, co-financed by the George Lucas Family Foundation.

Among the Other Events, the lineup at Cinema Trevi continues, after the series dedicated to Antonella Lualdi, with a series of screenings dedicated to the Italian adapter and screenwriter Roberto De Leonardis, to whom we pay tribute with the screening of Charlotte’s Web (at 5 pm) and Limelight (at 7 pm).

Sala Sinopoli will be the venue for some of the repeat screenings of the official lineup, with They Shall Not Grow Old by Peter Jackson (at 3 pm) and The Hate U Give by George Tillman Jr. (at 5 pm). Repeat screenings will also be featured in Sala Cinema Hall with Boy Erased by Joel Edgerton (at 8 pm) and We Are Afterhours by Giorgio Testi (at 10:30 pm), and at MAXXI with Bayoneta by Kyzza Terrazas (at 3 pm) and An Impossibly Small Object by David Verbeek (at 7:30 pm). These last two films will also be screened at My Cityplex Savoy: Bayoneta at 6 pm, and An Impossibly Small Object at 3:30 pm, along with Powrót (Back Home) by Magdalena Łazarkiewicz at 8 pm and Daughters of the Sexual Revolution: The Untold Story of the Dallas Cowboy Cheerleaders by Dana Adam Shapiro at 10:30 pm. 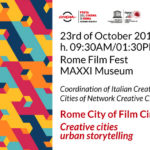 The CINEDAYS of Rome City of Films, the urban stor... 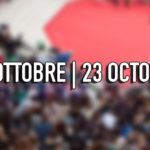