Auditorium Parco della Musica – Foyer Sala Sinopoli and Foyer Sala Petrassi | 18-28 October, 9 am 12 am
In collaboration with Rai Cinema and with the support of Istituto Luce – Cinecittà

Photographer Riccardo Ghilardi’s passionate eye guides us through a journey punctuated with the most well-known faces of cinema stars and catches them in those iconic locations that year after year showcase the dream factory of cinema: Cannes, Venice, Berlin, and Los Angeles, home of the Academy Awards and the Golden Globes, as well as Toronto, Rome, New York and many more.

The exhibition, held in the Foyer Sinopoli at the Auditorium Parco della Musica, features fifty portraits Ghilardi shot during his career spent travelling to international film festivals as a portrait photographer for the international agency Contour by Getty Images.

Ghilardi’s camera has always caught the stars at those very moments just before the lights go up on the red carpet, or right after they have been turned off: when the celebrities reclaim their intimacy and humanity, loading up on them, it seems, to steel themselves for the next round in the spotlight. As Ghilardi himself has observed: “Those were my moments, when I tried to catch their essence. I had the honour of having my own ‘slots’ in the packed festival schedule, and I took these portraits of the ‘people’ behind the celebrity.” During the Rome Film Fest, festivalgoers will be able to admire the quality of these portraits and share the emotions they arouse.

Once again this year, as part of the project promoted by the Presidency of the Council of Ministers’ Department for Equal Opportunities aimed at preventing and halting violence against women, for its 2018 edition the Rome Film Fest is devoting special attention to this issue.

As well as hosting a series of films in its Official Selection that are sensitive to women’s issues, the Rome Film Fest presents “Riso Amaro”, an exhibition of illustrators, graphic artists and humorists from around the world. The title of the show borrows the title of the 1949 film by Giuseppe De Santis which portrayed the harsh conditions of the women laboring in Italy’s rice paddies, with the main character being victim of a rape. The exhibition wields the arms of creativity and satire to tackle an issue of utmost importance and currently the subject of heated debate, in the belief that satire, in the form of graphic art, can play a key role in generating discussion and exposing abuse, representing a genuine manifesto that says “Violence against women: never again”. The exhibition organized by Associazione Culturale Festival Grafico, is curated by Julio Lubetkin, assisted by arts consultant Marilena Nardi, and will be held in the Cinema Village.

In addition, during the Rome Film Fest there will be a screening of the finalist short films featured in the competition “Cuori al buio”. The competition appealed to filmmakers to make short films on the theme of violence against women, with the aim of changing sociocultural behavior to weed out prejudices, customs, traditions and practices based on gender stereotypes and prevent abuses of power and discrimination. The shortlist was selected by a jury headed by actress Maria Pia Calzone and including Roberto Andò, director, screenwriter and author, with journalist and philosopher Ida Dominijanni. The winner will receive a prize consisting in €2,000, wherease the shortlisted directors will receive an accreditation to attend the Rome Film Fest screenings and events.

Marcello Mastroianni’s life was “a life lived between intervals”, or at least, that is how he defined it. Intervals between one set and another or one stage and another, over the course of a career packed with countless films, shows and characters. Now an exhibition shows how tightly interwoven the actor’s personal life and career really were: “Marcello Mastroianni” opens on October 26, on the occasion of the Rome Film Fest, at the Museum of the Ara Pacis in Rome, and runs through January 6. “There’s still a lot to learn about Marcello,” says curator Gian Luca Farinelli, “and to find out everything we can, we need to stick close to his filmography, which is the mirror image of his own life.” Marcello Mastroianni’s whole life and career shine through a selection of the most celebrated portraits of the actor, clips from his films, recordings of his shows and a variety of mementos, in a visual and narrative tour de force that constitutes a full immersion in Italy’s most famous film icon. The exhibition is promoted by Roma Capitale and the Councillorship for Cultural Development – Capitoline Superintendency for Cultural Heritage; it is co-produced and curated by the Cineteca di Bologna, with the support of the Ministry for Cultural Heritage and Activities and Istituto Luce – Cinecittà. Museum services by Zetema Progetto Cultura, management coordination by Camilla Morabito’s Equa.

The exhibition “Piero Tosi. Exercises in Beauty: His years at CSC. 1988-2016” reconstructs the teaching career of the great costume designer at Italy’s oldest and most important film school. For decades, Piero Tosi was one of the most brilliant creators of costumes for the cinema, for stage and for opera productions, and television, as the Oscar© for Lifetime Achievement he received from the Academy of Motion Pictures Arts and Sciences in 2013 attests. Moreover, in twenty-eight years teaching at the CSC – Experimental Cinematography Centre (from 1988 to 2016), Tosi trained dozens of talented film students, such as Massimo Cantini Parrini, Daniela Ciancio, Andrea Cavalletto and Andrea Sorrentino, and worked with all the young actors and directors who studied at CSC while he was there. The exhibition describes Tosi’s job and mission as a teacher, inextricably intertwined with his career on sets and stages all over the world.

The exhibition will be held at the Palazzo delle Esposizioni in Rome (via Nazionale 194), and will run from October 16 to January 20, 2019.

THE PRISONER | EXHIBITION BY MARINA SAGONA

The new exhibition by Marina Sagona, “The Prisoner”, will open on October 17th at Fondaco (Via della Frezza 50-51, Rome). In a series of drawings and sculptures, as well as a sound piece, the artist will illustrate the pain and claustrophobia of bad relationships. As author Claire Messud writes in her essay introducing this work: “We are always ready to give, believing that sooner or later our sacrifices will be recognized; we always put the needs and desires of others before our own; we are proud of our ability to stand steadfast in the midst of the flames, and to burn”. The exhibition is organized in collaboration with Hdrà and Municipio Roma I Centro. 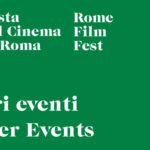