The 11th Rome Film Festival comes to a close tomorrow. At 5 pm, Oscar®-winner Roberto Benigni will be the protagonist of a Close Encounter in Sala Sinopoli at the Auditorium Parco della Musica. The actor, director, screenwriter, and incredible all-around performer Roberto Benigni will walk the red carpet at 4:15 pm.

At 9 pm, also in Sala Sinopoli, there will be a screening of Ritmo sbilenco – Un filmino su Elio e le storie tese: the film will be introduced by Elio, Rocco Tanica and director Mattia Colombo. It reveals the hidden side of a historic band from Italy’s music scene, out of the spotlight. Ritmo sbilenco is not a music documentary but a cinematic snapshot of what Elio e le Storie Tese are like today, after a nearly thirty-year career. From their appearances at the Sanremo Festival to their tours in Italy’s largest sports facilities: it is all told from the original point of view of the people they are now, not just the artists they have always been.

At 2 pm, the MAXXI will be the venue for the screening of If I Close My Eyes, a documentary by Francesca Mannocchi and Alessio Romenzi, which tells the story of the life Syrian refugees lead in Lebanon. The documentary focuses in particular on the children who cannot go to school, who must work for a handful of dollars a day, refugee children who have lost their fundamental right to education and school.

For the one-hundredth anniversary of the birth of Dino Risi, at 4 pm the Rome Film Fest will dedicate a tribute to the master of Italian-style comedy with the screening of Dino Risi Forever, the premiere screening of a documentary by Fabrizio Corallo. At the end of the film, Paolo Mieli will talk about the mark that the filmmaker – author of Il sorpasso, Una vita difficile, I mostri and Profumo di donna – left on the history and lifestyle of post-war Italy. Afterwards, Fabrizio Corallo and Mario Sesti will invite several actors from his films to share their memories of Risi, including Elsa Martinelli, Lino Capolicchio, Ricky Tognazzi and Andrea Occhipinti.

The public of the MAXXI is also invited to see Field Niggas by Khalik Allah (at 7 pm) and Kings of Nowhere (at 9:30 pm) by Betzabé Garcia, two of the three documentaries screened as part of the collaboration between the Rome Film Fest, MIA and Frames of Representation. FoR is a creative film workshop founded by curators Nicola Marzano and Luke W. Moody to promote the production and distribution of documentary and experimental films. FoR is a meeting ground for directors, artists and thinkers from around the world, as well as a space to explore and promote independent forms of narration.

The retrospective dedicated to Valerio Zurlini, curated by Domenico Monetti and Mario Sesti in collaboration with the Centro Sperimentale di Cinematografia – Cineteca Nazionale, closes at the Cinema Trevi with Violent Summer at 5 pm, Girl with a Suitcase at 6:45 pm, and The Desert of the Tartars at 9 pm.

Captain Fantastic by Matt Ross, winner of the “BNL People’s Choice Award” will be screened again at 9:30 pm in the Mazda Cinema Hall.

In the Sala Sinopoli, there will be a screening of Kicks by Justin Tipping, the winner of the Alice nella città sidebar (at 12 noon). The tribute to Abbas Kiarostami comes to a close with two short films – Toothache and Tribute to the Teachers ­–  to be screened at 5 pm in Studio 3 and with two films to be shown at the Cinema Admiral movie theatre: Experience (at 12 noon) and Life and Nothing More (at 2 pm).

The program of repeat screenings at the Mazda Cinema Hall includes Swiss Army Man by Daniel Scheinert and Dan Kwan (at 12:30 pm), Little Wings by Selma Vilhunen (at 3:30 pm), The Hollars by John Krasinski (at 5:30 pm) and Genius by Michael Grandage (at 7:30 pm). At The Space Moderno movie theatre, the screenings will feature La tortue rouge by Michael Dudok de Wit (at 4 pm), Genius by Michael Grandage (at 6 pm), Lion by Garth Davis (at 8 pm) and Train to Busan by Sang-ho Yeon (at 10:30 pm). The Cinema Admiral movie theatre will present the repeat screenings of Rock dog by Ash Brannon (at 4:30 pm), Babylon Sisters by Gigi Roccati (at 6:30 pm) and Lovesong by So Young Kim (at 8:30 pm). 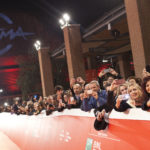 Facts and Figures of the 11th Rome Film Fest...

Critical Conditions: the presentations of the pane...