Copyright: Image by J.R. Eyerman. © Time Inc. All rights reserved. Image used under license. Time Inc. and LIFE are not affiliated with and do not endorse products or services of their licensees. Photo of Gene Kelly can be used With Permission of The Gene Kelly Image Trust.

This year the Rome Film Fest will celebrate the grace, the liveliness, and the imagination of dancer, actor, singer, film director, producer, and choreographer Gene Kelly, twenty years after his death. The American artist, whose immense talent and incredible versatility left an indelible mark in the history of cinema, will be the protagonist of the new poster for the Rome Film Fest. The image, by LIFE Magazine photographer J.R. Eyerman, captures a magical moment on the set during the rehearsals of one of the most memorable scenes of Singin’ in the Rain. During a party, Gene Kelly imagines that he is dancing with Cyd Charisse, and the photo portrays the grace and harmony of their oneiric encounter. The photo is used with the kind permission of the Gene Kelly Image Trust and Time Inc.

“The image we have selected is a perfect embodiment of the sense of elegance and joy that I wish to give the Fest” explains artistic director Antonio Monda. “Cyd Charisse and Gene Kelly’s gesture is the stuff of dreams. I would like to underline that this masterpiece of cinema succeeded in being both popular and sophisticated at the same time”.

The Rome Film Fest, produced by the Fondazione Cinema per Roma chaired by Piera Detassis, will take place from October 13 to 23 2016 at the Auditorium Parco della Musica and in other venues in Rome.

Viggo Mortensen to meet the audience during a Clos... 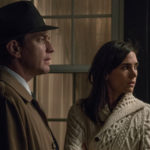